Was I to tell you how much conservative and lazy I am when it comes to new technologies and communication media you wouldn’t believe it. Still, I am. Every time a new social network, a new platform or a new technological gadget hits the net, I’m like “Oh, for God’s sake, I just learnt how to use the older ones!”.

Probably I took it after my father, who was the last person in Italy who bought a cell phone and still watch DVDs with some suspicion. In any case it’s hard for me to stay up-to-date and when I decide to upgrade my knowledge I have to do it the hard way: learning by myself. Hundreds of tips and to-dos and not-to-dos are useless if I don’t try personally first. I have to smash into the wall. Only after that I start listening to advice.

Facebook has been around since 2004, when I was 17, but I finally decided to sign up only years later, when I was at University. I wasn’t sure I was going to like it and surely I didn’t feel like I needed it. Text messages where more than enough to keep in touch with family and friends.

I felt almost the same when I heard about Twitter. I knew it was there but why should I have started something new when I was having so much fun with Facebook? Did I really need another social network? One seemed enough for my purposes. However, after so much talking about it, I decided to give it a try.

After a first few days of puzzlement, I began to get into it and I liked Twitter a lot! At that moment I wasn’t thinking about myself as a writer yet, so I didn’t really know what to use it for but I was enthusiastic about this new (at least new for me) kind of short texting. It was a great exercise at summarizing ideas (I’ve always been a little long winded) and I really appreciated the idea of using key words (I learnt later that they were called hashtags) to mark my content.

After years of using Facebook only, Twitter was a breath of air but, as happens in most love stories, after the first period of unconditional love, I started losing interest. Moreover my Twitter timeline looked like an endless series of self-promoting posts with little space for real communication. That’s why after a while I started using it like everyone else: I connected it with my blog and only posted there to promote my posts.

Actually it didn’t work at all.

A few weeks ago however something clicked in my head. I can’t remember what it was, but something pushed me to go back to Twitter to try to use it in a more productive way to promote my writing. I began with analysing what was going on on my timeline.

What people were talking about?

But most important I was in search of those features that catched my attention. I noticed three things:

1. I tend to ignore tweets with too many hashtags (#) or hashtags that are difficult to understand;

3. I like tweets with quotes and sentences I can retweet, with links to useful blog posts and with short blurbs of novels.

The reasonable things to do was trying to replicate in my tweets what I like in other’s tweets. And the result was surprising! After months and months of absolutely nothing, people started following me, retweeting my messages and sharing my contents. So here are the three simple rules I followed.

1. Keep your presence constant: Twitter timeline is like a huge square full of people where everyone is talking at the same time. Sometimes it’s more crowded other times it’s quieter, but to be heard over the noise you have to be there constantly. Since I can’t spend my day glued to my laptop or my smartphone, I decided to use a tool to schedule my tweets during the day. Hootsuite it’s great for this. It has many interesting features you can pay for, but if you are interest only in scheduling your posts you can use it for free.

…or links to interesting resources…

…and thoughts that can resonate with many people. 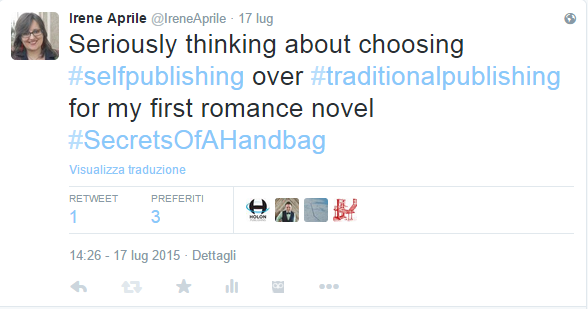 3. Keep it simple: I know that hashtags helps making your Tweets visible, but too many are detrimental, especially if they are difficult to understand. Twitter users don’t have time or will to decipher your tweets. If they don’t understand, they will go on without a second thought. So my suggestion is to put an hashtag only near the important key words in your message.

That’s all! It may seem simplistic but it’s working for me at present and I’m still learning how to better put to use this incredible tool that’s Twitter. I’m far from an expert on the matter…

Now I really would like to know about you! Do you like Twitter? What do you use it for? How do you use it? What kind of tweets do you prefer?

8 thoughts on “Three key rules I learnt about Twitter”